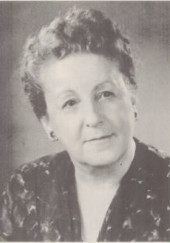 Miss Louise Glennie was elected the first President of the 25 Year Club in 1964, the year the club was founded, keeping this role for 3 exceeding years.

Miss Glennie began her employment with NB Power (New Brunswick Electric Power Commission) in 1924 working in St. John office until her retirement after 44 years of service in 1968.